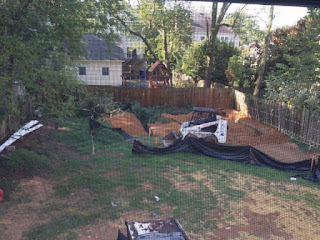 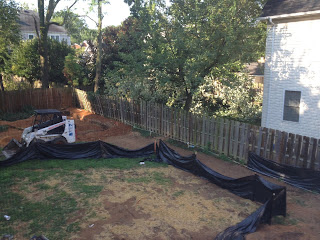 We got hit with a crazy storm last night with some of the strongest winds I've seen in awhile and torrential downpours.  We were worried about the trenches for the footers but when we checked on them this morning, they had held up just fine.  No cave-ins, just a bit muddy.  I guess with all the heat and drought lately, the dirt was happy to soak up some of the water!  We had a few big branches fall into the yard, including one that appeared to crush one of the willow trees, but we fired up the chain saw this morning and made quick work of it.  We had all our branches cut up and out on the street before most of our neighbors even got outside.  And, happily, the willow tree looks like it will be just fine.  It bent completely to the ground but didn't break so we've staked it back up and I think it'll recover with no problem.  Our neighbors weren't so lucky - they had a huge tree come down in their backyard but it missed their house and fence so while it's a big clean-up job, there's really no damage.  Our neighborhood also fared pretty well in general - we lost power for about 9 hours last night but it came back on this morning just as we were about to turn the generator on.  Hopefully the weather will settle down now and we can get back to work!
Posted by Kristin at 11:44 AM No comments: 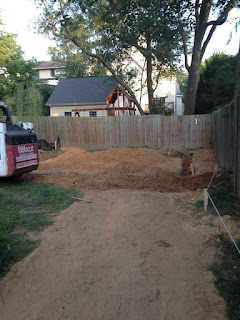 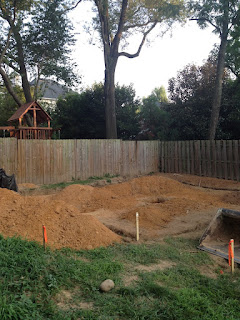 Construction on the garage has started!  The concrete guys spent yesterday and today hand-digging the footers.  I thought they would bring in an excavator but I guess sometimes work still gets done the old-fashioned way.  They'll put the steel rebar in tomorrow, we'll have an inspection on Monday, and pour the concrete on Tuesday.  It's a bit of a mess right now but after so much delay, I'm just glad to see some progress.

Back to the small stuff 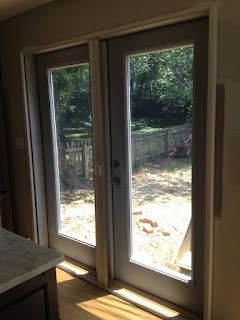 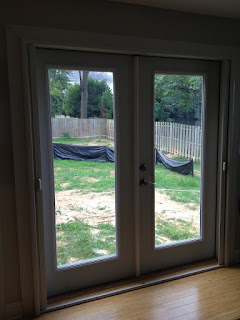 While we wait for the concrete guys to break ground on the garage foundation later this week, we continue to work on small stuff in the kitchen and dining room.  One task done - we framed out the two French doors and finished installing the retractable screens.  It turns out that the screens don't photograph particularly well - the top photo has the screens drawn but it's hard to see anything other than the latch in the middle.  There's a surprising number of options for retractable screens out there and in a range of prices, but we went with the basic Jeld-wen retractable screen doors and are happy with them so far.  We had to tighten up the tension a little bit but they extend and retract smoothly and are nicely out of the way when they're not drawn.  We had thought about boxing out the ends but instead just framed right around them and think it looks nicely built-in as is.

We also repaired our Mosquito Magnet to give it another try this year but so far, it's only caught a handful of mosquitos.  Since I seem to get bitten by at least a dozen different ones every time I step out the door, I'm not impressed with its performance yet.  But, at least with our new screens in, we won't have to worry about the bugs getting into the house when we open those doors! 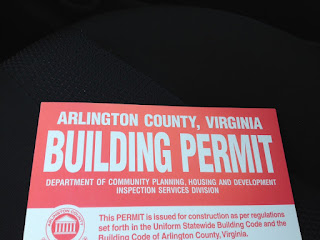 It has taken a ridiculously long time but we have our garage building permit!  I picked it up this morning and we can finally get this project underway...
Posted by Kristin at 9:40 AM 5 comments:

Let there be sound 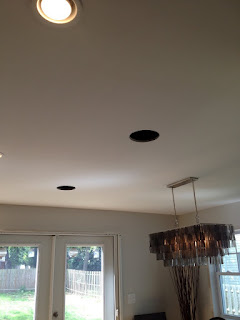 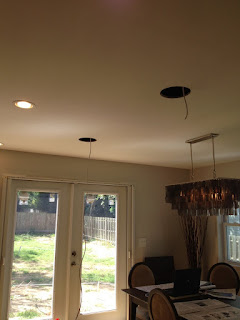 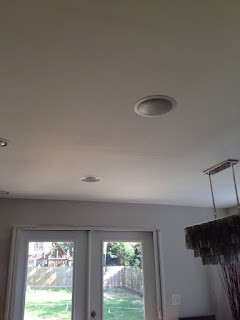 One of the perks of being married to an IT person is the ease with which one can cut holes in the ceiling, run wire, and hook up new electronic stuff.  In this case, the additions consisted of speakers in the kitchen/dining room area, Apple TV, and some new repeater thing that means our electronics can move to the basement instead of being in pointing distance of the remote.  Goodbye FIOS box, DVR, tv cabinet, wires, and all sign of electronics.  The only thing left in the living room is the television and playing music in the house is as easy as calling up a playlist or Pandora on our iPhones - no iPhone dock needed - and letting the electronic-magic-elves do their thing (yes, that is how I understand technology to work).  Of course, we still need to get a bigger television and mount it on the wall and we'll eventually add speakers throughout the first floor but all that has to wait until we demo and reconfigure the first floor.  Still, it's a big improvement to have everything hidden away and some speakers installed now.

We also tackled a bunch of smaller, non-photogenic tasks this weekend, most of which were related to trimming out the kitchen and installing screens on the two French doors that will, permit-gods willing, someday lead to a patio in the backyard.  This week should bring permit approval...or a total meltdown on my part if we hit another snag.  Either way, there will probably be news!

**** I wanted to add a few details about what we used so far. In the basement we have a Denon AVR-1910 reciever, Apple TV, DVD player, FIOS DVR, FIOS internet router, and a Cables-To-Go IR repeater. Upstairs we have two Polk RC60i ceiling speakers in the kitchen/dining area and a Polk PSW111 subwoofer between the kitchen and the living room. We'll have to find a place to hide the subwoofer behind a chair or something, but it's pretty small so that shouldn't be a problem. It provides the bass for the first floor really well. In the living room we'll eventually have four Polk RD60i ceiling speakers and a Polk CS20 center channel. All of this should give us quite a nice sound system for music or movies/TV at a very reasonable price. Even with two speakers the sound is great.

The IR repeater is a great, cheap way to hide all your gear in a convenient location. The workroom in the basement happens to be right below our living room where the TV is going so that provided an easily accessible, but hidden place.

The Apple TV was a great little find. I went to the Apple store to pick up a dock and after seeing that the Apple TV was both cheap ($99) and had an HDMI and optical outputs I was sold. Once I hooked it up I realized how well it integrates with the iPhone. All you need to do is open up Pandora or your music (or any app) and click the little airplay icon on the screen, select the Apple TV device, and everything starts playing over the speakers wirelessly. There's a few configuration things I had to do to make it happen with the reciever and speakers, but all in all it was an easy setup.

I almost forgot... we also have a Harmony One remote to control everything easily. All you have to do is select "watch TV", "watch DVD", or "listen to music" and voila... it works and turns on the appropriate stuff! 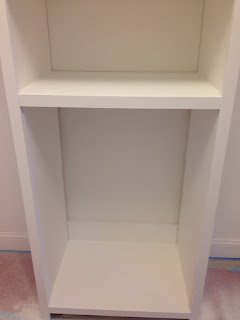 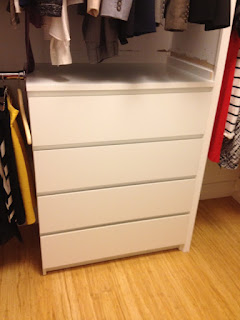 We're still here!  A couple of things have derailed us from blogging for the last couple of weeks.  First, we spent a weekend in New York City on a whirlwind visit.  Thanks to a lucky alignment of schedules, we managed to spend time with friends of mine from high school, college, and law school all in a 27 hour period.  It was, in short, a wonderful weekend away - but one that was wholly bereft of house-progress.

Then, we logged into the county system a week ago Monday to see that our garage permits had been approved - hurrah!  But when we went to pick them up on Wednesday, we learned that we were being rejected by the Department of Environmental Services - noooo.  Since we didn't even know DES could reject us - assuming, naively, that Zoning and Building were the two relevant departments - this was a deeply unpleasant surprise.  Without getting into the details (because it is late and I've been living this issue for a week now), I thought DES was improperly reading/applying a statute and they thought I was, well, a pain in the ass.  Several meetings with various and sundry officials, plus one particularly long letter (and many thanks to my friend Jake for taking the time on a Sunday to edit my work!) later, I am cautiously optimistic that we've worked out a resolution.  We need to submit a bit more information so Project Garage remains stalled for another week but I'm crossing my fingers and hoping that by next week, we'll have a permit and can finally move forward.  We've been planning this project for so long that I feel like the darn thing ought to be built by now but if all goes well, we can break ground this month.  The Bobcat is getting bored out back.

On other news, we finally bit the bullet and admitted that building the master closet drawers was just a tad bit too ambitious - at least given the amount of time and effort we were willing to put into them.  Since these drawers were my brainchild, Brian was not exactly excited to spend the several days we would have needed to make really nice drawers and neither of us was happy with the not-so-nice drawers we had started constructing.  So, he made an executive decision and ripped out the drawer box frames and replaced them with everyone's go-to source for furniture - Ikea!  I dug up an old picture showing the original drawer box where we had planned to install four drawers and below is the current closet with the Ikea dresser installed.  We still have a little painting to do but by adding trim to the dresser, it came out surprisingly well and looks very much like a built-in.  Next time, we'll plan to build the dresser in from the beginning and save ourselves from the never-fun ripping out of old work.  But, I'm glad we finally did it - the drawers had become one of those projects that neither of us wanted to do and yet both of us were resenting the unfinished closet.  A little paint and the master closet will be officially finished.

So, it's been a one-step-forward, two-steps-back kind of week but I'm learning (or trying to learn) that sometimes construction is like this. We'll try to get back on track over the next few weekends, both with work and with posting, so stay tuned.