And now for something completely different

Happy almost new year!  It's been awhile since we've posted and we're still plugging away on getting our plans drawn up and permits approved for the house but in the meantime, we...bought a studio apartment and renovated it.  This wasn't mentioned before because it wasn't actually part of our plan!  One of the hazards of not having a renovation in progress is that it apparently leaves me with too much time to look at real estate listings and, long story short, we found a very good deal on a very tiny studio in a condo complex where I used to rent many years ago.  The combination of familiarity and opportunity proved too much to resist and we bought it in mid-October.  And promptly found ourselves spending a lot of nights and weekends working on the renovation but, in just a couple of months, we finished the renovation, listed it for rent, and will have a tenant moving in soon.  Fingers crossed that we like being landlords...or our realtor will be getting the next phone call!

The studio is so small that it was both quick to finish and very frustrating for the lack of space for tools.  We're already looking forward to working on our own house where we don't have to drive even a short distance or play the never-fun game "where is that tool we need right now?"  And there are a lot of things we would normally rip out and replace but shared walls and basic economics prevented us from doing so in the studio.  Nevertheless, we've managed to make some tweaks to the studio and think that it's nicer now than it was before - the pictures will tell the tale!

Skipping ahead...we didn't do a good job taking in progress pictures but here's the reveal:

So that's it!  The final tally for 2019 is one house sale, one house purchase, one move, and one condo purchase/reno/rental.  That's a lot more excitement/stress/progress than we would have expected a year ago!
Posted by Kristin at 4:48 PM 2 comments:

And...we're back at it with another renovation project!  After looking at what seemed like every house for sale - with our wonderful realtor, Heidi Robbins of Buck Realty - we settled on a project that is new in more ways than one.  Unlike our prior projects, we're not intending to completely change the exterior look and feel of this one because we love the original style.  Also, it's already bigger than any of our other houses originally were so, hopefully, we have less to add to it.  And instead of aiming for a Craftsman-style look, we're thinking of a more modern design this time around.  All in all, there should be plenty of new challenges ahead!

Starting from the exterior - the house is a Federalist style, built in 1940 and designed by Louis R. Moss, a DC architect who also designed the Chevy Chase Arcade and Yates Gardens in Alexandria.  Some exterior shots:

We found the original blueprints in the basement when we were cleaning things out - check them out!  We'll frame them and eventually hang them in the house.


Moving to the interior, we forgot to take photos on moving day so instead of a big roundup now, we'll be posting before and after shots by room.  We're working with our architect and engineer to draw up plans but have also started deconstructing the house.  Now that we're on our third major project, we have the (over?)confidence to start demo before our plans for how to rebuild are finalized.  We both took a week off from work in July and spent the time gutting the basement and starting to demo the family room.  Among other things, we took out a half bathroom in the basement and a full bathroom on the first floor - so as Brian likes to say, we're in the stage where our house is currently worth less than we paid for it.  Which to me means, there's no turning back and the renovation is officially on!

Then we moved up to the family room.  You'll be shocked to hear we aren't keeping the wood paneling:


We forgot to take an "after" shot with the other closet and that side of the room demo'd but here's a good before and after of the dumpster!

After many months of neglecting this blog, we're back with an exciting update...the house is officially finished and under contract!  Happily, we negotiated a long close period so we have a couple of months to figure out our next move/project but for now - the professional pictures from BTW Images (with commentary, of course): 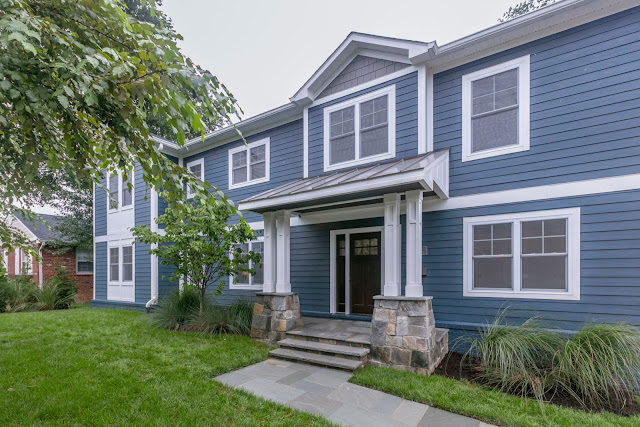